If you care about Bromley and its heritage and green spaces, please support us by joining the Society. Membership per household is only £10 per year. You can join or renew your membership either by visiting our membership portal. or by sending a cheque with a letter giving your full name, postal address, where possible your email address, and a contact telephone number to the Membership Secretary, 3 Hayes Road, Bromley BR2 9AF.

Joining will mean that you receive our regular newsletter emails, and help fund our efforts to save our historic town centre being dominated by tower blocks.

Posted in BCS news | Tagged Join Us, Membership | Comments Off on Join BCS (and calling all existing members!)

The view of the town centre – or rather the trees – from Queens Mead and the railway line, is protected.

Two developments will ruin this view : the S2 application to put 16 storeys in place of the former Maplins neo-georgian shop [planning here] and Churchill Quarter [planning here]. Please write and object to these so we do not loose the lovely view our council is supposed to protect.

This 1932 neo-Georgian shop is one of only 2 buildings considered good enough to be worth saving in the proposed Master plan of the lower high street.

This proposal is much higher than the surrounding buildings (16 storeys compared with 2 or 4) , overbearing, and will stick out for miles around (being on the ridge top).

This area already suffers from inadequate infrastructure – shortage of GPs, overcrowded stations – and these units would be better built on sites that are walking distance from one of the other 16 railway stations in the borough.

S2 Developments have ignored the feedback from their public consultation and pushed ahead with their over-sized development.

“Look out in the new Picturehouse Cafe for the Art Deco screens from the former Co-op in Widmore Road.

“Picture Perfect Day” our heritage walks, in the words of a lady on the street…

On Saturday 22nd June I lined up outside Boots in The Glades more out of curiosity than anything else, as a lifelong resident of the borough of Bromley I figured there wasn’t much I didn’t already know.

How wrong I was, and what an absolutely fantastic day I experienced, along with at least 25 or 30 other folk. Our two hosts for the morning tour entitled ‘Bromley Palace and Park’ were clad in Victorian suits and hats and provided entertaining and illuminating information about aspects of Bromley previously unknown to me, and I’m sure others were equally surprised and delighted.

END_OF_DOCUMENT_TOKEN_TO_BE_REPLACED
Posted in Blog | Tagged guided-walk | Comments Off on “Picture Perfect Day” our heritage walks, in the words of a lady on the street…

Please write and object to this sale to :David Mark Bowen, Director of Corporate Services, LB Bromley, Stockwell Close, Bromley, BR1 3UH  or email it to : mark.bowen@bromley.gov.uk    Mark it Proposed sale of land at Bromley Civic Centre  and include your name address and postcode otherwise it will not be accepted.  Don’t be put off by this mad deadline !:  Copies to the Ward Councillors and BCS would be welcome.
CllrNicky.Dykes@bromley.gov.uk   William.Harmer@bromley.gov.uk   Michael.Rutherford@bromley.gov.uk
chair@bromleycivicsociety.org.uk

We like our Market Square with enough open space for our market – If you want to continue to have our market in Market Square, find a moment to object to this planning proposal 19_00241: https://searchapplications.bromley.gov.uk/online-applications/applicationDetails.do?activeTab=summary&keyVal=PLEVE4BTJHM00

The annual flowering of the shrub, from which Bromley takes its name, takes place on Martin’s Hill mid April to the end of May and we recommend all visitors and locals to witness this event of living history so fundamental to the heritage of Bromley Town.

The planning application for the “Churchill Quarter” development in Bromley town centre has now been submitted (planning reference: 18/02181).

The development, adjacent to library gardens, is a co-development with the Council providing the land and Countryside Properties responsible for building and operations. 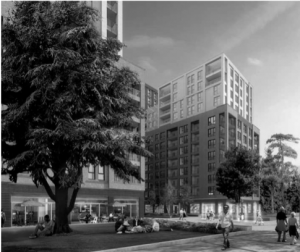 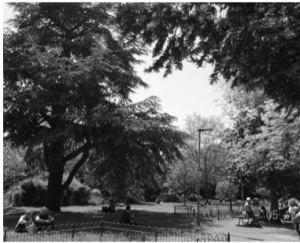 Before and after images showing the effect of the development can be seen on the right.

END_OF_DOCUMENT_TOKEN_TO_BE_REPLACED

This veteran oak tree (Quercus robur) was reprieved, when the Glades was being built, and still proudly stands at the side of Kentish Way.

Originally it grew on the corner of the grounds of the house “Bromley Lodge” and Love Lane. It is over 500 years old.

It is one of the Great Trees of London #GTOL

The Ice Well and Boating House

The original ice well was built in the mid 1700s, when the well-to-do would store ice, collected from marshes around the Thames or even as far as Norway, in the winter, and would be served in the summer.

This ice well was then remodelled, by Pulhams, in the Victorian era, so that it also had a nice porch with a seat in (currently removed for alleged antisocial behaviour), with a view over the Ha-Ha.

It has also been used to store boats.

Rediscovered in 1754 (by the Bishop’s domestic chaplain, a Rev Mr Hardwick); a spring seeping into the moat was identified as a chalybeate spring, complete with buried ancient oak steps.

“Chalybeate” means that the water contains minerals, usually iron. There was a fashion for ‘Spa’ cures from about 1600AD onwards with towns like Bath and Tunbridge Wells being built around them, catering to the rich ‘taking the waters’. The Pulham Rock site says that it was supposed to possess healing properties capable of curing almost everything, including:

‘ . . . the colic, the melancholy, and the vapours.   It made the lean fat, the fat lean; it killed flat worms in the belly, loosened the clammy humours of the body, and dried the over-moist brain.’

In 1754 it was roofed with thatch over 6 pillars – replaced with tile roof by the Lord of the Manor, Coles-Child, but this has not survived into modern times. The spring is chalybeate, and from a perched water table that also seeps out by Churchill Theatre and along the base of Martin’s Hill. St Blaise was the patron saint of wool carding (bishop of Sebaste in Armenia with a gruesome death) and quite popular in medieval times.

“The Bishops built a well a few hundred yards from the chalybeate spring, and marked it with oak trees.   It was about 16 inches in diameter, and the canopy had a roof of thatch, thus heightening the picturesque appearance of the scene, as shown on the left of Fig 2.   The water rose so slowly, however, that it took nearly four hours to yield a gallon of water.   There was an orifice in the side of the retaining wall that enabled surplus water to trickle over into the adjacent moat – or small lake – that borders the grounds of the palace. It eventually became a place of pilgrimage, and an oratory in honour of St Blaise, the patron saint of the wool trade, was built close by.

After the Reformation, however, the oratory fell into ruin, and the well into disuse, although it is not clear whether they ran out of pilgrims because they died of the colic, melancholy, the vapours or old age while they were waiting for their cups to be filled with chalybeate water, or as a result of drinking it. “

Some photographs, old and new, of the well:

The Pulham Rockery and Fernery

These listed structures were installed by the new Lord of the Manor, Coles-Child, as part of his restoration and modernisation of the old Bishop’s Palace.

Pulhams had invented an early form of concrete, which looks quite convincingly like rocks – but was much easier to install the shapes and forms that customer’s wanted.

The basic structure was constructed from brickwork, and then the artisan would put a rendering of ‘pulhamite’ over the top, putting in rock-like layers and shapes as he plastered the render on. Top of the range installations had fossils incorporated.

The Palace Park boasts the Rockery – a cascade structure out of the moat – and a fernery, which had little scoops in, for planting. The fernery is situated on the spring line behind the little brick pool marking St Blaise’s well.

from the Friend’s page about this park: “Queen’s Garden represents the last remnant of the countryside hugging the old Market Square on the east side of town. It was part of the farmland belonging to Bromley Palace (now the Civic Centre) stretching from the White Hart Inn in the High Street all the way to Widmore Green. By the l8th century it was known as White Hart Field and it was here that the coaching horses could graze and where the town held their cricket matches. Despite its accustomed use by the townsfolk the field remained in the possession of the Lord of the Manor until donated to the town in 1897 on the occasion of Queen Victoria’s Jubilee and on condition it was laid out as a public garden.”

A large section of it was sold to the developer’s of the Glades. They gave some exchange land, but as this lacked the protection of public park land, this was then claimed back in 2015 and the restaurant terrace built on it.

Built in 1908 this building housed the offices of Bromley Electric Light Company. Behind was the coal-fired ‘power station’ whose tall chimney dominates old photos of the town centre. It was there for over 30 years.

The railway station of Bromley South.

The original town rail station was at Shortlands.

The tattooist (No. 217), and the next door shop, occupy an 18th century house, worthy of mention as it was the premises of two Bromley notable historians and printers, each producing from this shop an invaluable histories of Bromley – Thomas Wilson in 1797 and John Dunkin in 1815.

The row of 5 windows is distinctive in old photos of the High Street.

This shop was the site of Morley’s Academy, which was on the upper floors, where the author HG Wells went to school, after he had graduated from the Dame school on south street. It was demolished in 1902 and replaced with the current building.