Let’s NOT spend £1m on a giant greenhouse in the High Street – never mind the two recycled basket funnel sculptures.

The proposal is for the council to spend £1.2million on this ‘Street Clutter’ from money scrimped and saved from other contracts, such as park maintenance.  It is being rushed through so they can construct them in June.

Our money is paying for this “High Street Regeneration”:

The High Street ‘Regeneration’ proposals.  From left to right: A fountain to link to St Blaise’s well; this is supposed to look like the broom flower.  A huge greenhouse blocking the front of the 1887 French Empire frontage.  And this double concrete funnel is not how the Time Machine is depicted elsewhere.  The Council chose designers whose ‘house style’ is funnels and who have previous installations of large glass houses. What a missed opportunity.

The funnel designs are recycled from a failed bid for the Sudanese peace memorial, and are previously used in several shopping centre proposals. This is not the architect’s fault – this is what our council and/or it’s planners, chose from their bidding process. Whilst the designers consulted the Civic Society as an identified stakeholder, they were never going to take our suggestions on board and amend these poor choices, as the outlines of these designs had been picked by our Council/civil servants.

The plan is to put a giant green house in front of one of the nicest buildings on the High Street. Some of our objections: 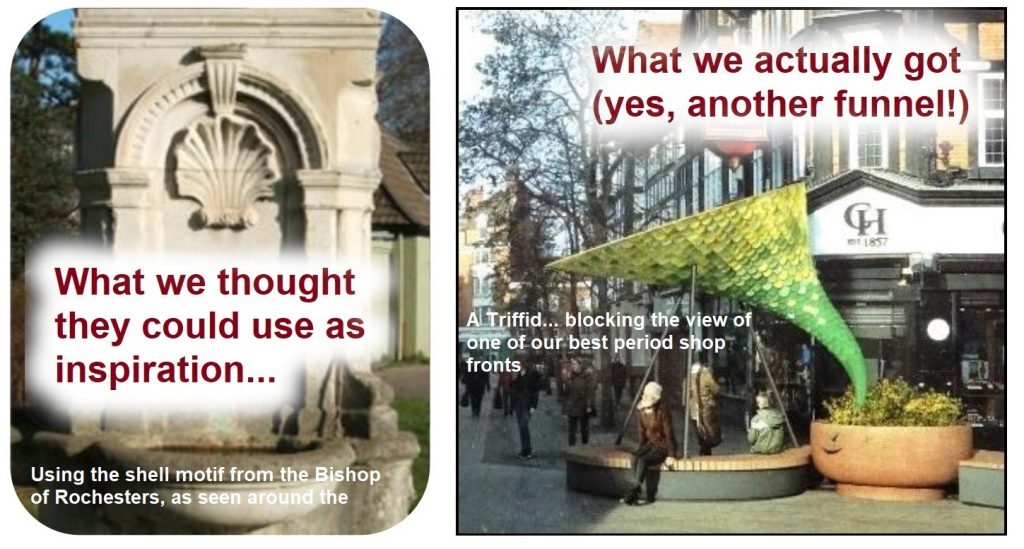 Fountain in Market Square – what we got is a mouldy triffid

We don’t like the two sculptures either, though we understand this is a matter of taste.

* Though the designers cited consulting local heritage in their design, this only resulted in changing one of them to be yellow (so the ‘drinking fountain’ looks more like a triffid).
* Celebrating HG Well’s ground breaking Time Machine is a good idea, but doing a ‘cut and shut’ job on two more basket funnels has no relevance; every other image of it is of a chair with a circular fan structure behind it. It’s their ‘house style’ but not relevant to Bromley and it’s conservation area.

These structures are supposed to have a long life, but as these ill-conceived designs are the result of a bidding process in which the public was not consulted, they fail to represent Bromley, or it’s heritage, and just reflect the ‘house design’ (and funnel preoccupation) of the designers. We don’t think they will last more than 5 or 10 years, and not a good use of £1.2million.

The full details of our considered objections, and suggestions for rectification, are given in this .pdf document. It is a real shame, that the Civic Society was only consulted when it was too late. This was after the Council had issued it’s brief and chosen the designs.