Posted on 4 January 2019 by campaignr

Aberdeen Buildings – this distinctive high profile parade was built in 1887 by a local butcher, Amos Borer (presumably named after the top quality breed of Beef Cattle!).  His premises was the end shop (which was “No 1 Aberdeen Buildings” but is now 107-109 High Street, occupied by Clarke’s Shoes).

In Heritage England’s words (April 2020): “The terrace at numbers 95 to 109…were built in 1887 by a local butcher, Amos Borer, and were inspired by French architecture. They are symmetrically arranged over three storeys with attic accommodation above and are executed in high quality brick and terracotta with original pilasters forming the shopfront openings at ground floor level. The symmetry of the buildings is further enhanced by a central hanging clock at first floor level and a decorative stone feature at roof level indicating the date when the buildings were built. “

The architecture is called ‘French Empire’ and was a tribute to the Emperor Napoleon III and Empress Eugenie, who lived in exile, at Camden Place, Chislehurst.  They shopped in Bromley.

In addition to hoped-for Imperial patronage, Mr Borer held the coveted title of being ‘Purveyor of Meat’, by Royal Appointment, to the Prince of Wales, who was a regular visitor to Sundridge Park (for whose convenience, Sundridge Park stations was built).

An old postcard view of them from Victorian days. All the awnings are very noticeable (keeping your shoppers dry in inclement weather!) and behind you can see the tower of the Old Town Hall and the Electricity Company’s chimney: 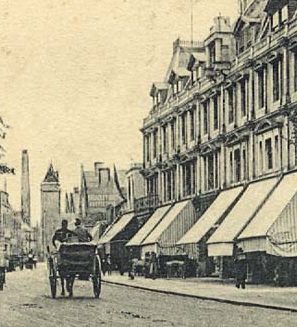 Postcard from BBLHS showing the Aberdeen Buildings and Broadway in 1904