Write to say ‘No’ to the Draft Open Space Strategy

Posted on 2 January 2021 by campaignr
This draft strategy is the plan for our Parks, open- and green-spaces for the next ten years. The devil is in the (very) small print: to rank and ‘dispose’ of an unnamed number of parks/open spaces. The council has provided a survey for you to input your views. However, it seems to mislead the participant into (1) filling in their open space usage (2) focussing on the least controversial content of the Strategy (which is conveniently hidden in size 6 font in a sideways table). Instead, you might also want to email: william@ocat.co.uk (portfolio holder) James.Hilsden@bromley.gov.uk & will.harmer@bromley.gov.uk with the following points (putting them in your own words would be good):

* we need is an Open Space Strategy in which the Council “brave enough” to resist ‘repurposing‘ of any more Open Space. This comment leads on to our conviction that open spaces are a precious amenity and there should be no question of ‘development’ or ‘disposal’ for whatever reason.

* Maintenance has already been cut to the bone and reduced to mainly grass cutting and pruning where once it was used for wonderful floral borders and creative planting. We need more, not less, maintenance funding, if our open space heritage is to regain even a small measure of their previous appearance.  There should be an investment in the un-made footpaths on our parks and commons to cater for the increased dog ownership following the work from home trend.

* ‘Increase commercial use of the Open Space Portfolio to offset management costs and a sponsorship strategy to provide more innovative income streams‘ sounds like privatisation of our public parks for commercial profit, (to offset council maintenance costs) and resulting in the compromise public enjoyment of the space. This strategy is not the place for such objectives, and they be put forward in a separate plan for people to comment on.

* Make sure that the “events programme that supports the Bromley and Local economy” does not include large-scale events. People do not want to find that our parks suffer like Clapham Common (and half a dozen other London parks) that become seas of mud, fenced off from residents from March to September every year.

* There should also be concrete plans to restore our heritage Palace Park, its plantings and it’s listed structures – such as the recently collapsed ice house.  The stated plans for restoring the vulnerable brickwork at Scadbury Park, and the bandstand in Croydon Rec are good, but the Palace Park is actually more historic.  We do not want to be held to ransom for the community levy payments from unwanted high-rises in the town centre.

However, if you want to fill in the survey, here, we have some suggestions of entries you could make that reflect these serious problems, further down the page, here. 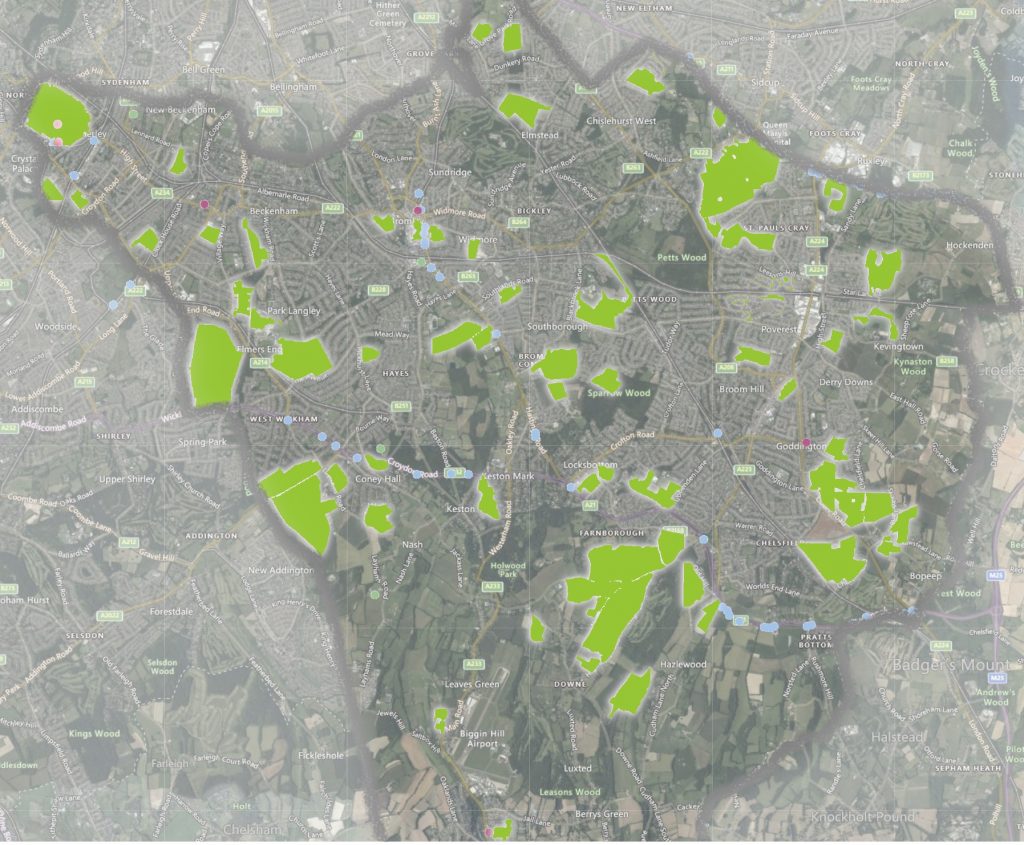 Mayor of London map of Council owned land in LBB – zoom in at https://apps.london.gov.uk/public-land/ to see how much is around you (that could be built on)

Here’s the location of (Bromley’s) Open Space Strategy: https://www.surveymonkey.co.uk/r/XNWWJGC.  We have also drawn up a list of actions that are promised for individual parks: (our post here) For comparison, the Open Space Strategy that Lewisham drew up this year, included the following: Filling in the Survey: We have some suggestions as to what you might like to enter for the Open Space Strategy survey (here) which organises our points into the questions of the survey: A note on the document structure of Bromley’s Open Space Strategy: all the alarming and unwelcome proposals are buried in small print, either in infographics or in a very small font (size 6!), orientated sideways in tables. Around these are glossy pictures and out-of-borough case studies that, whilst inspiring, do not align with the stated objectives of reducing investment and maintenance. The Strategy also mentions putting wind turbines at Martins Hill and solar panels in Library/Church House gardens. As these proposals are ridiculous for a town centre park, it is possible that these are only here so they can be removed later ‘because of public opinion’. Therefore we don’t think it’s worth your time commenting on them.
This entry was posted in Blog, Campaigns and tagged Draft Open Space Strategy. Bookmark the permalink.