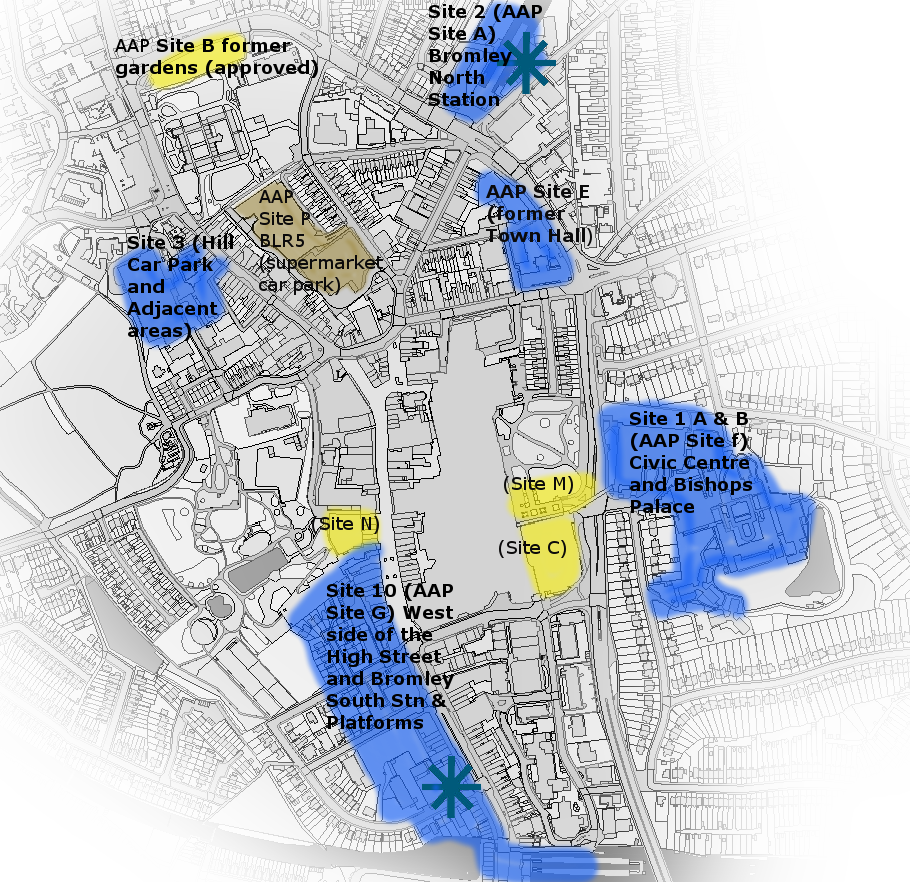 Table of Local Plan sites, adopted 2018, and their housing allocations.

The AAP was drawn up and adopted by Bromley Council in 2010. The plan identifies the following sites in the Town Centre for development. It has been somewhat modified by the Local Plan adopted in 2018.

Site A (Site 2 in the Local Plan): Bromley North station.

Site B: Tweedy Road adjacent to Bromley & Sheppard’s College. Approved despite harm to the 17th Century widows and spinsters colleges.

Site E: The Pavilion. AAP proposals to move these leisure facilities onto the Civic Centre site and extend the Glades shopping centre have been abandoned. Bromley Mytime, a charitable trust, has completed a £5M refurbishment of this leisure centre in March 2012.

Site F: Civic Centre (Local Plan Site 1). AAP proposals were relocation of the Pavilion Leisure facilities, housing and retained Council use. Current Local Plan proposals are retained offices, retained car park , 70 housing units including conversion of the Palace building, retention of south east open space as a public park as now. BCS sought restoration of the Palace grounds in consideration of what has been lost to build Kentish Way, the multi-storey car park & the newer Council offices and continued public use of the Grade II listed Palace. This has been rejected by the Council.

Site G: Lower High Street (Local Plan Site 10 now extends to include BS Station and platforms). AAP proposals for a shopping Mall now scrapped in favour of the Local Plan modification for 1230 residential units plus offices. Vicinity of TK Maxx site is identified in the AAP as possibly suitable for a tall/taller building. This gave rise to a 2018 consultation by the owner for a 20 storey block of flats opposed by BCS. No planning application as yet.

This is the most controversial of all the development sites. The Council intend acquiring by CPO the 40 homes in Ethelbert Close for what is called Phase One – Churchill Quarter. This is a co-development with the Council of 410 flats still awaiting a decision. The AAP Inspector required the Council to produce a Masterplan for the whole site but this was only produced in 2018 well after the Churchill Quarter application was made and proposes a mass of tower blocks. The upper part is in the town centre conservation area and environmental groups including Historic England have objected both to Churchill Quarter and the Masterplan. A decision on both from the Council is still awaited. In 2014 Crest Homes implemented a large flatted development in Ringers Road on part of the site which had already gained permission from the Council before the AAP have been drafted.

(Planning ref: 11/03865/FULL1). The outline plans predate the drafting of the AAP and the development is now complete nicknamed variously as the ‘ski slope’ or ‘titanic’ because of its shape by locals.

Site L: DHSS Building and Christian Centre, Westmoreland Road & Mason’s Hill. A hotel development was approved in 2013 by the Council but the site was acquired by the Department of Education and subsequently subject of an application for a 10 storey School building (the SHAW). This was recommended for approval by Council officers but refused by Councillors. The subsequent planning Appeal was dismissed February 2019 mainly on grounds of the loss of the protected view of Keston Ridge which is something of a breakthrough decision for environmental matters in the Town Centre

This entry was posted in Campaigns. Bookmark the permalink.