The neo-Georgian style former Town Hall extension (now Exchequer House) in Widmore Road, was built in 1938-39 and designed by Charles Cowles-Voysey (see wiki), well known for his work on town hall and public buildings in the 1920’s and 1930’s. He was the son of C.F.A. Voysey, one of Britain’s most influential architects of the Arts and Crafts movement. 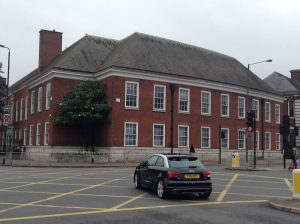 This property has been sold by the council, and together with the 1907 former town hall next door, has a planning application (expected to succeed) to develop it into rentable office space: