S2 Estates have put in an application for a 20 storey tower on the site of the former Maplins store.  Their supporting statement said that it felt it would help locals find the High Street.

Like circling vultures waiting to pick the bones of our historic old town developers are being lured by the Council’s ill-conceived Masterplan and the Site ‘G’ designation for the redevelopment of the west side of Bromley High Street from the Library down to the railway and beyond.

Bookending what would be an army of tower blocks is the Council’s existing St Mark’s Square development, aka the ‘Titanic’, at one end and their proposed 15 storey ‘Churchill Quarter’ at the other now said to be Phase One of the Masterplan. This is still awaiting a decision and if approved will overwhelm Library and Church House Gardens and used to set the general height standard of the Plan.

Spurred on by this, S2 Estates, are now proposing a 20 storey High block rising straight up from the pavement where Maplin’s used to be. Ironically, the Masterplan sets aside this particular site as being ‘Buildings of townscape merit’ and is one of the few areas not earmarked for development.

The building proposed is also much higher than anything envisaged in the Masterplan. Tony Banfield, chair of the Bromley Civic Society said:

“Whilst the Masterplan has been condemned by the Ward Councillors as being destructive to the essential character of Bromley, this proposal, at 20 storeys on a clearly unsuitable site, goes above and beyond even that envisaged in the Masterplan. Councillor Peter Morgan, Portfolio holder for Renewal responsible for the Plan, has clearly unleashed a raging beast on our Town Centre environment. We hope and expect the Development Control Committee of the Council will refuse permission.”

This opportunistic proposal by S2 estates highlights the need for protection of the buildings deemed to be of architectural and townscape merit in the southern part of the High Street. These properties will be particularly vulnerable given all the development likely to take place around them. BCS have suggested in their response to the Masterplan that 66-70 High Street (formerly Maplins and adjacent properties) and 54-62 High Street (Laura Ashley and adjacent properties) should be included within ‘island’ extensions to the Conservation Area to give them long lasting and effective prevention. We hope that the Council will now see the merit in this and will go along with this suggestion.

It is not too late to have your say, there’s a feedback form at: https://highstreetbromley.co.uk/

The Masterplan can be viewed at www.bromley.gov.uk/downloads/file/3514/bromley_town_centre_site_10_masterplan 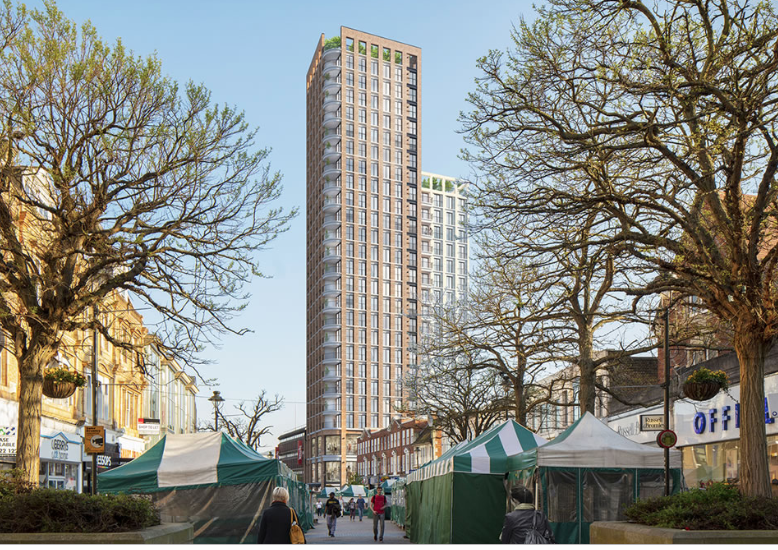