Market Square is the centre of the Old Town which, until the coming of the railway in 1858, comprised a single street (down the side of market square).  It has been re-laid out, twice, in it’s history.

The Market Charter, to hold a market every Tuesday (later changed to Thursday) was granted to Bishop Gandalf (the Bishops were the Lords of the Manor) by King John in 1205.

Interestingly, you can still see the pre-Victorian limits of the pre-railway town: it stretched from Bromley College in the north, to Tweed Cottage in the lower High Street.

Until the Victorian times, Market Square had a traditional market building in the middle, with a veranda to shelter the stalls.  This 1858 illustration is from Edward Strong’s book on Bromley.

Then the High Street was straightened with the ‘New Cut’.  Previously, this had been an alleyway behind the shops on the east side of the High Street (where it had widened out for Market Square).  This enabled the construction of a row of shops on the steep slope above the river.  They included ‘Atlas House’ where the author HG Wells was born.  Due to the back of the shops being a storey lower than the front, he describes living in the dingy kitchen and the light being blocked by pedestrians walking over the lightwell in the High Street pavement. 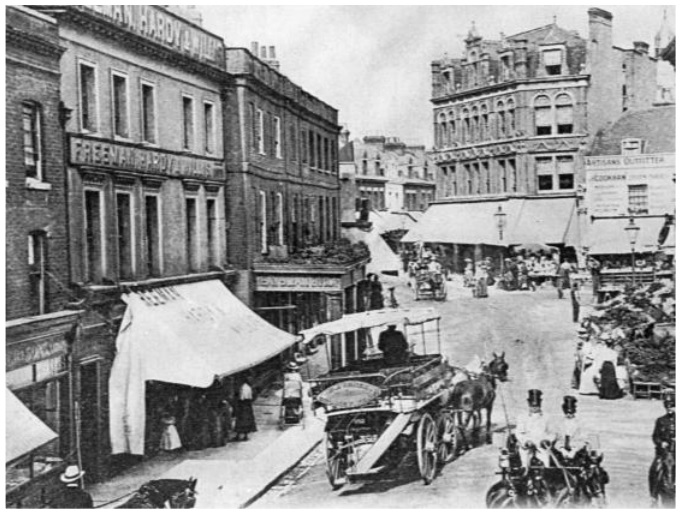 The north end of the ‘Island’ shops facing Market Square. The Royal Bell is behind.

Rounded southern end of the Island shops of Market Square

The Lord of the Manor (which had been sold by the Bishops of Rochester in 1845), Cole-Childs, a coal merchant from Deptford, then built a new ‘Town Hall’, in 1863, in the centre of market square, from his own bricks. It housed the first police station (with a cell to replace the ‘Cage’ on Widmore Road), the first fire-station, and a large upper room for civic meetings.  However, the Vestry (who ran the town) never met there, so it was not used as a Town Hall.

As the traffic from the high street was getting congested with the market, in 1933, the market was moved to Station Road (now moved back so that ‘site A’ can be developed into tower blocks).  The town hall and island shops were demolished to be replaced by the present block of black and white shops, in the culmination of the Old English style of the Arts and Crafts movement.